A great short hike and a prime spot to do some whale watching.  Even if you’re not completely enchanted by lighthouses, a trip to this one in Crescent City, California, is really worth it.

It’s a good idea to check the tide charts as it’s not accessible at high tide. You can tour the lighthouse April through September from 10 am to 4 pm, Wednesdays through Sundays. Dogs aren’t allowed on the island. There’s a gift shop inside the lighthouse but no public rest rooms. 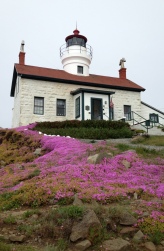 Ask about being a lighthouse keeper; reservations are booked about three years ahead of time. There are two surprisingly spacious bedrooms, a kitchen and bath.

The lighthouse has survived the worst the western Pacific can throw at it including waves so high they’ve knocked out windows in the lantern room. The 1964 tsunami created by the Alaska earthquake devastated much of Crescent City but the Battery Point Lighthouse made it through.

What to bring: a camera, binoculars for whale watching, sturdy shoes, cash for admission to the lighthouse.