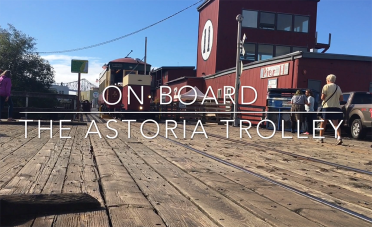 As a conductor of the Astoria trolley, you need to be ready to navigate the tracks along the south bank of the Columbia River. Steering isn’t required. But you also need to act as a tour guide. We rode along as Bob Miller, a Portland radio fixture for decades, now semi-retired in Astoria, did his trolley conductor stint aboard the Old 300.

Watch until the end as we take you behind the scenes back into the trolley barn and a final “kiss” to the basketball at the end of a shift.

Astoria’s “Old 300” was built in 1913. A roundtrip will cost you just a buck, ride all day for just $2.00. That’ll let you get on and off to explore the waterfront as much as you’d like.
Tip: the roundtrip takes about an hour. During our last visit, the GPS function that allows you to see where the trolley is at any give time, was not working. And one other tip, make it very obvious to the conductor that you want to get on board. Even if you’re at a trolley stop, it’s possible that it will fly on by. Volunteers suggest you wave a dollar bill in the air.